On Sunday, November 15th, the phantastic lute player Michalis Tzouganakis from Crete came to my hometown Mainz to give a concert during his "The Spirit of Crete" tour through Germany and the Netherlands. On his tour, he had been to Duesseldorf and Munich before this gig in Mainz.

I never had heard of him before, didn't know his music, but - after some research in the internet - decided to go to his concert. Tickets were 24 Euro in Mainz. Maybe about 200-250 people showed up for the concert, but quite a few seats remained empty. And, not too many greek people around. Nevertheless, it was a phantastic night!

Michalis is an incredibly fast lute player and an extraordinary singer. He was accompanied by four superb fellow musician.
Kostas Sindridis (keyboards), Theodoros Kouelis (bass) und Grigoris Sindridis (drums/percussion). The lyra- and mandoline player Giorgos Skordalos is a class on its own.

I really was surprised by the very pleasant volume in which he delivered his soulful and expressive songs. I have experienced ear-smashing concerts on Samos when local bands were playing.

In the first half of the concert, Michalis sang more slow and emotional songs. After the break, he opened with one of his most famous songs, "Pali, Pali". And the audience went crazy immediately.

Incredibly fast runs on the fingerboard of the lute will end abruptly, then unexpectedly are continued starting in higher
or the highest layers. In between, over and over again, he throws in some syncopated or offbeat attacks on the lute. His music is very rhythm oriented and often abruptly changing.

Michalis sings and handles his instrument with full body use on stage and very often shakes his black lion's mane (yes, he's a lion, born on the 31st of July!) That he has to work hard and persevering on his lute and himself could well be a life issue.

After the concert I came to know four dedicated fans of him, who travel to follow him and try to participate in most of his concerts.

And whom did I meet - mediated by a really big fan from Leverkusen - very late at night in front of the City Hilton hotel in Mainz? Sitting there with two of his tour companions smoking cigarettes? That was a good opportunity to talk with Michalis in a small group.

Michalis Tsouganakis will appear in one more concert in Germany: on Saturday, November 21st, in Berlin, Jazz-Club Quasimodo, 10:00 pm

I asked him if he had played on Samos already, but he denied. He has been to many islands, but not to Samos. Maybe a good idea to invite him in the summer season to Samos, e.g. during the Samos Wine Festival in Samos-town.

Well, how does his music sounds like? On the internet video platforms (e.g. YouTube or Vimeo) videos from his concerts have already been published by fans.

Here are some examples:

From a Greek TV show:

Concert in Frankfurt in the "Fabrik" in May 2009

Concert in Düsseldorf during his tour through Germany in November 2009

Concert in Mainz during his tour through Germany in November 2009

Stories of Ireon at night (part 2)

Part 2: the good and delicious food 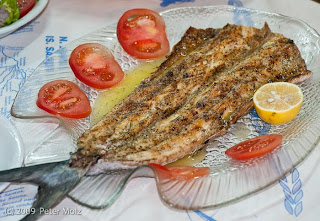 Over the years I came to know a couple of taverns on Samos I really like to go to and spend some time there with friends. The musician Dimos first took me to this place in Ireon two or three years ago. Since then I like to go there again everytime I'm on Samos: the fish tavern "Captain Miltos"! Fresh grilled fish at its best!
And I especially like the sword fish fillet and the calamari, together with the rosé wine!

Imho it's not a spectacular tavern, rather a place at a dark corner which many tourists won't even take notice of when passing by. 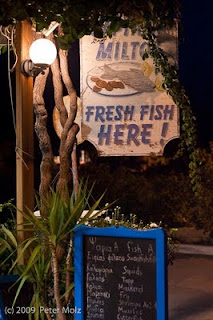 This year I was lucky to be there twice, here are some of my photographic memories of the visits to this tavern: 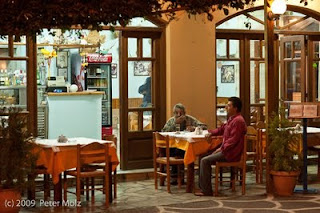 "Our" swordfish fillets on the grill. "Lecker" as we germans say! 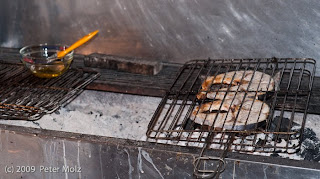 Well this here is our table, my "farewell to Samos table" on that evening on October 12th, filled with many delicious things.
Dimos ordered all of these via cellular phone when we were on our "race" from Balos beach to Ireon: 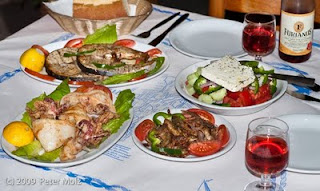 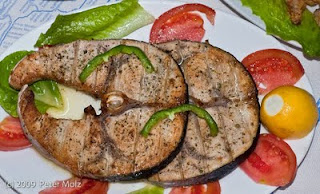 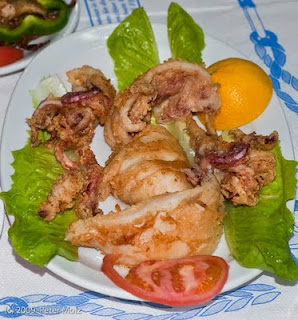 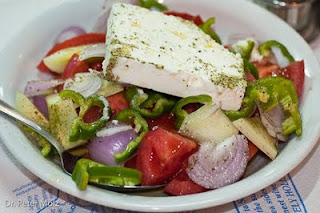 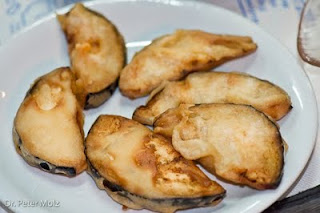 Swordfish portion for two people (on that other visit): 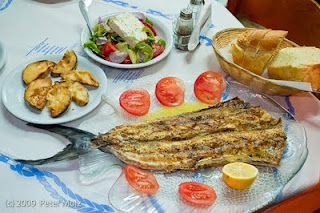 Captain Miltos showing what he fished out of the sea, e.g. a big tuna fish, weighing approx. 20 kg.
Not so easy for him to hold this big fish up for a while to allow me to take a good photo! (Maybe that's why he doesn't smile here anymore! ;-)) 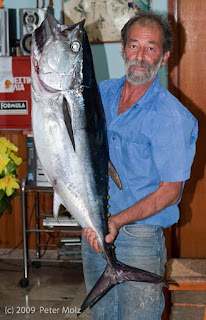 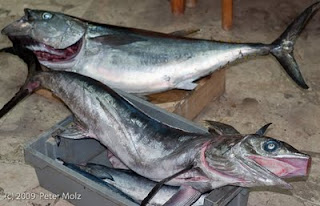 So it's time to say goodbye: The "Blue(s) Brothers" ;-) Captain Miltos together with Dimos. 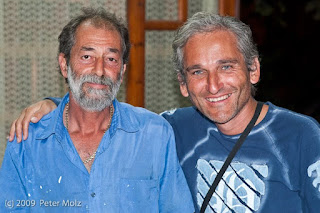 I get the blues, bye till next year! 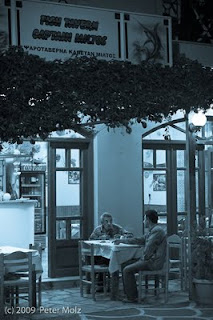 We enter the car and hurry back to Pythagorio. Dimos has only little time left to be in time for starting his music show in a hotel. And I walk slowly - and a bit tipsy I must confess - down the main street of Pythagorio and then up a side street to my studio to take a rest to get rid of some alcohol.
2 hours relaxing time and a warm shower before I will head down to the harbour. At 10:30 p.m. I will meet with Mike in the harbour in another nice place, Manolis' ouzeri called "Karafaki". For some special photographers conversation enhanced by greek "Mythos"! :-)
Posted by Peter Molz at 1:20 AM No comments:

Stories of Ireon at night (part 1) 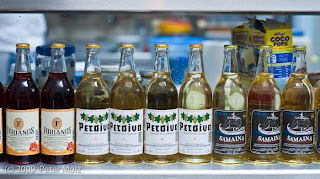 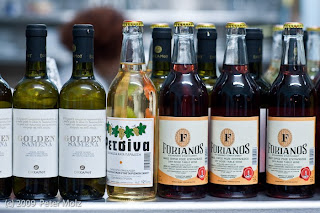 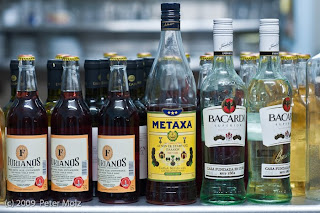 You ask, where is this place? The full story will be revealed in part 2 together with photos of the delicious food there! :-)
You wanna guess? Here is some hint! 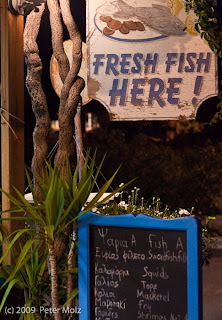 Curious about the wines of Samos? If you are interested in these wines, either dry or sweet, red, rosé or white, and where you can get them in your country, please pay a visit to the website of the Union of Vinicultural Cooperatives of Samos (EOSS).
Of course, in many taverns, you will find that local wines are served too as house wines.

Here a short excursion to the history of samian wines can be found .
Posted by Peter Molz at 6:18 PM 2 comments:

04:54 am at my friends bar ... my aproach of creative art Photography... well, at least we were artistic that night... 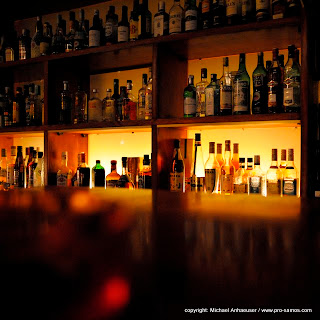 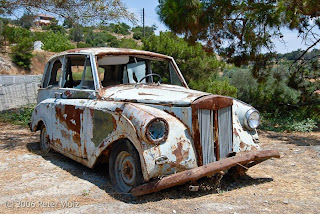 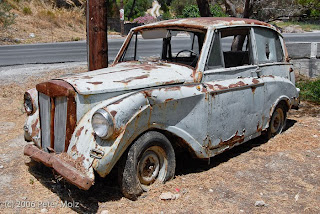 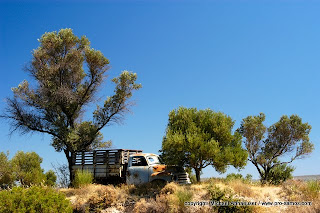 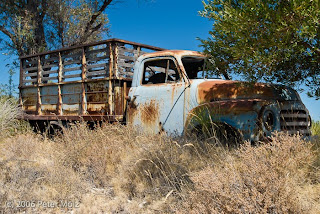 Holidays on Samos? Looking for a photo of a car wreck? Well, no problem, Samos is rich in old car wrecks!
A wealth of these rotten and forgotten vehicles can be found along the roads, partially hidden in forests or stuck in fields, and in the gardens around the houses. Since many many years!

The photo above is from the year 2006, this was my favorite car wreck. But it had been removed already the next year I came back to this place.

Lately, Rainer Kastl has started a Samos vehicle wreck collection using latest technology. He has taken a lot of photos in October 2009 and positioned the vehicle wrecks he found according to their GPS data on a map of Samos! Now they are so easy to find, nobody can miss them anymore!

He collected 44 wrecks within his two weeks stay on Samos. And, in time, more and more examples will be added as points of interest to this map of car wrecks on Samos. Isn't it astonishing, what you can do with modern technologies? ;-)

Here is the link to the Samos vehicle wreck map.

Me and Mike could contribute quite a few more, but we don't have the respective GPS data.

Btw., already in 2008 Matthias Hänsch from Germany published a gallery on his website called "The old cars of Samos"

More photos of rusty vehicles on Samos can be found here and here
Posted by Peter Molz at 3:57 PM No comments: