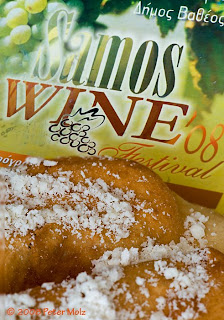 Every year in July and/or August, the Samos wine festival takes place in several villages of the Vathy district. The final festivities are held in Samos-town, a five days event on a site near the harbour with lots of things to eat, drink and listen to.

If you happen to be one of those lucky tourists who like to come to Samos and already uses the intenet, don't try to find information on this years event in advance in the internet! Google doesn't help and on the site of Vathy (http://www.vathi.gr/european_version/index_eng.htm) you will only find last years programme!!!
If you are lucky enough to be already on the island and discover one of the advertisings or even find a printed programme, you will be really positively surprised, because they set up a lot of events and all events are described in greek and english!

This year the Samos wine festival in Samos-town lasted from Saturday, August 16th to Wednesday, August 20th. Different dance groups and bands/musicians were dancig/playing there on a big stage.
I visited the festival on two consecutive days and here are some of my photos and impressions from Monday, August 18th and Tuesday, August 19th.

Monday, August 18th:
first there was a program for children with a clown, the children were fascinated by what was going on on the stage, mouth and eyes wide open ... 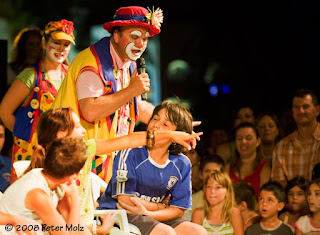 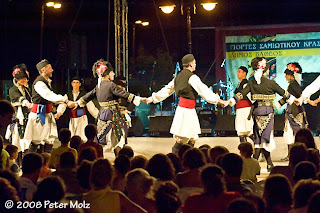 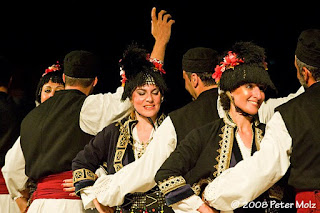 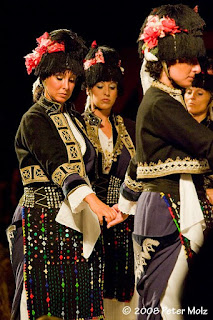 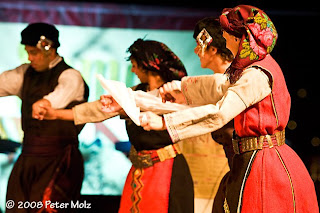 and then the greek "C-Real" rock band with powerful lead singer Irini Douka took over the stage. (website: www.c-real.gr/)
They started with many greek songs but later changed to songs sung in english. Nice to hear they had songs like "Zombie" of the Cranberries in their programme too. After the concert I had the pleasure to talk to Irini Douka for a couple of minutes. 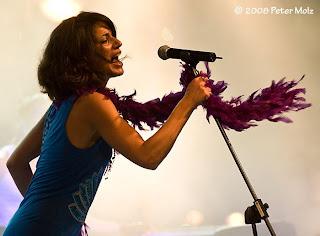 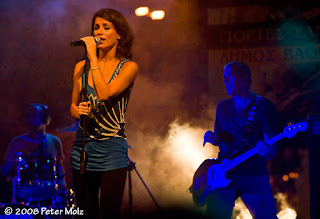 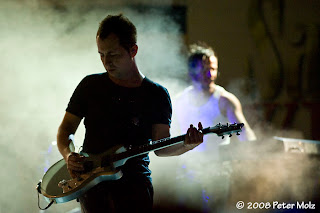 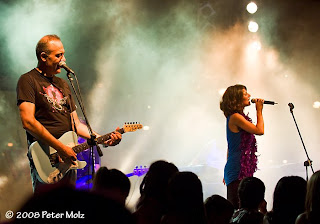 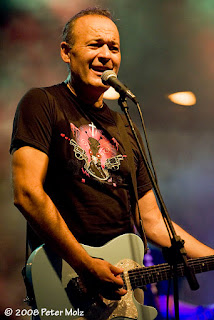 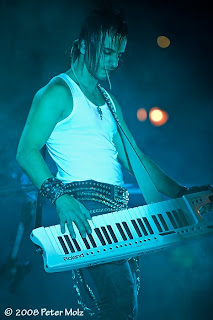 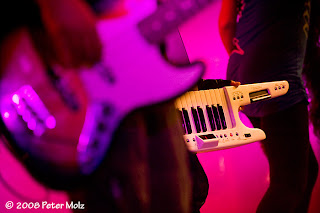 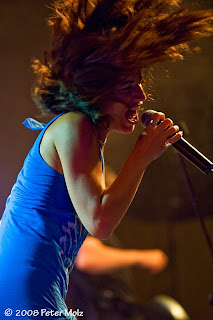 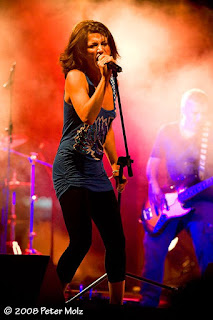 Some critical remarks:
unfortunately, the PA equipment supplied for the Samos Wine festival seems to be designed for a series of hard rock concerts and not taking into account that there are tradtional folk dancers appearing too. So the music for the dancing group sounded absolutely terrible on Monday night. Absolutely imbalanced bass and highs, extremely loud and shattering bass. What a pity for the beautifully dressed dancers.
Already in the last two years I wondered why they set up such huge amounts of equipment there only to achive such poor sound in most instances! The main focus seems to be on pushing up the volume to earsplitting levels. Because the sound engineers do know that, they build up their sound controlling platform at least 50 meters away from the main stage with the loudspeakers. ;-) 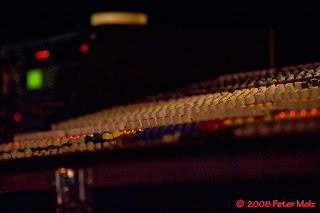 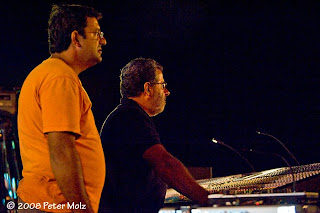 I went to the people who control the mixing consoles and amplifiers worth thousands of euros and asked them to change something about it, but they just said: "we cannot do anything, it's the CD they gave us". Listen to the following band, it will be a better sound!
Very professional attitude indeed.
Or pure ignorance for the heritage of Greece?

I'm pretty sure it took hours to set up the right sound for the following rock band "C-Real" using the mighty mixing consoles! And they don't have 5 minutes time left to adjust the sound for the dancing group in advance? Come on ....

My suggestion: why not try a different attitude next year? And focus on the sound quality of acoustic music in the first place?

A very good example for superb sound quality achieving an incredibly beautiful atmosphere was given on the occaison of the concert of "Café de l'art" (Notis Mavroudis, Panagiotis Margaris together with Anastasia Moutsatsou) at the Hera temple on the night of the full moon on August, 16th!

There is something else I noticed. One third of the greeks at the concert on Monday night didn't bother anyway for the sound of the music. Their life style seems to be: mobile phone pressed to one ear, the other ear they shelter with their hand to not hear the music and they make it an olympic discipline to communicate most of the time via mobile phones directly in front of the huge loudspeakers at the stage.